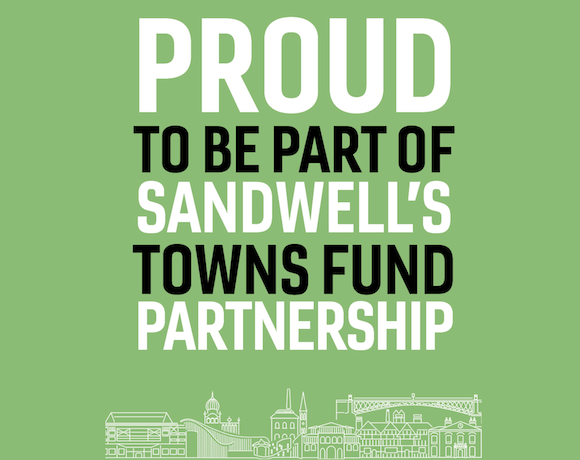 The total Towns Fund investment secured for the borough by Sandwell Council and its partners is £67.5m.

About the Towns Fund bids in Sandwell

In 2020, Rowley Regis, Smethwick and West Bromwich were among 101 places selected by central government to bid for funding in the national Towns Fund initiative. Sandwell Council worked in partnership with Sandwell and West Birmingham NHS Trust, Canal & River Trust, Greets Green Community Enterprise Centre and Sandwell College to help secure investment for sixteen projects across the three towns: five for Rowley Regis, five for Smethwick and six for West Bromwich.

In February 2022, an initial three projects for West Bromwich were approved:

All 16 Sandwell projects will be delivered in phases over the next five years.

‘A new future for West Bromwich and its residents’

Jude Thompson, Chair of Towns Fund Superboard, said: “These Towns Fund projects will make a real difference in and around West Bromwich, the aim will be to improve these areas making them a more sociable and welcoming environment for the local community and visitors.”

Chris Hinson, Chair of West Bromwich Local Board and Sandwell Business Ambassadors, said: “This fund offers a real opportunity to begin work towards a new future for West Bromwich and its residents and to create a town centre that encourages all ages to partake in educational, cultural and recreational activities whilst supporting the creation of good quality employment and housing.”